Will try to perform better in upcoming competitions: Anshu Malik after winning silver medal at CWG 2022 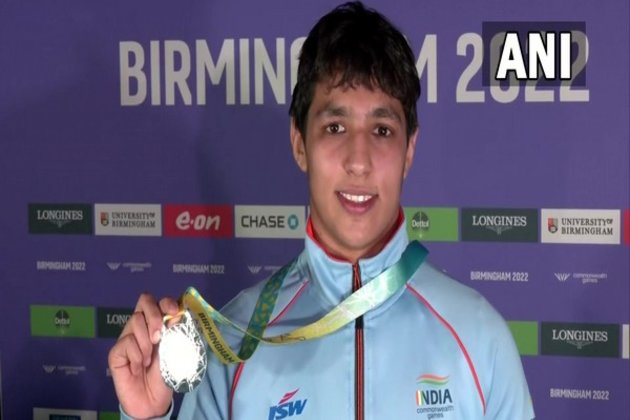 Birmingham [UK], August 6 (ANI): Following the silver medal win at the Commonwealth Games 2022, Indian wrestler Anshu Malik said that she will try to perform better in the upcoming events.

Grappler Anshu Malik won the silver medal in the Women's Freestyle 57kg category in the ongoing Commonwealth Games 2022 after losing to Odunayo Folasade Adekuoroye of Nigeria at the Coventry Arena Wrestling Mat B on Friday.

Malik faced 3-7 defeat against Nigeria's Adekuoroye in the gold medal match. Malik bagged the first medal for India in the wrestling of the ongoing Commonwealth Games 2022.

"I'm happy that I won a silver medal for the country in my first Commonwealth Games. I thank PM Modi for always encouragingmotivating the players. I'll try to perform better in upcoming competitions," Anshu Malik told ANI.

Anshu Malik fought hard but was too defensive at the start of the bout and changed her tactics at the last minute to bounce back which allowed Odunayo Folasade Adekuoroye to counterattack. Her Nigerian opponent was dominant throughout the match and took the match by pinning and rolling Malik out of the ring.

US claims American-JetBlue alliance is anti-competitive

BOSTON, Massachusetts: The U.S. Justice Department has asked a Boston judge to force American Airlines and JetBlue Airways to scrap ...

Abortion regardless of marital status legalized by India's top court

NEW DELHI, India: In a decision widely hailed by women's rights activists, India's top court upheld the right of a ...

Another delay for US moon rocket as hurricane approaches Florida

CAPE CANAVERAL, Florida: NASA has announced that it will roll its giant moon rocket, the Space Launch System, off its ...

MIAMI, Florida: As Hurricane Ian crashes across the Caribbean, bringing high winds and torrential rains, Florida residents are scrambling to ...

KRAKOW, Poland: Organizers said an April Roger Waters concert planned in Krakow, Poland, has been canceled due to Waters' support ...

TEL AVIV, Israel - The Israeli army has approved using drones to carry out assassinations in the West Bank.The extraordinary ...

BEIJING, China: During a ceremony this week, China certified its C919 narrow-body passenger jet, which is part of the country's ...

NEW YORK, New York - It was another volatile day on Wall Street on Friday as investors weighed up more ...

Asian stocks close out month and quarter on dismal note

SYDNEY, NSW, Australia - Asian stocks closed out the month and the quarter on a dismal note Friday."The 'troubling triad' ...

With eye on competition, Tata Motors selling $10,000 EV in India

NEW DELHI, India: As it seeks to attract more buyers, Tata Motors, the country's only electric vehicle maker, has introduced ...

40,000 Chinese workers to be deported as Manila ends online gaming

MANILA, Philippines: The justice ministry in Manila said it will close 175 Chinese-owned "Philippine offshore gambling operators" and deport some ...