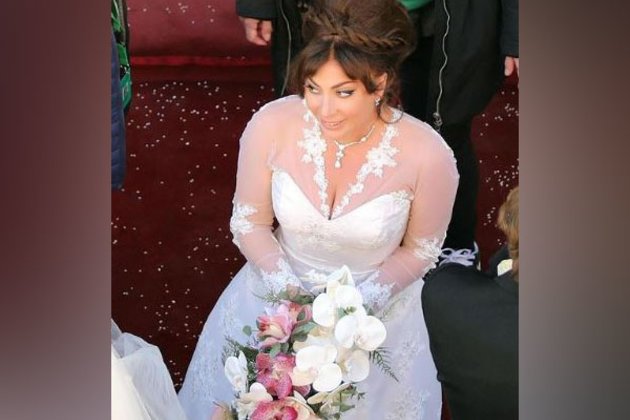 Washington [US], April 8 (ANI): American singer-songwriter and actor Lady Gaga stepped out in a stunning white lace wedding dress and cathedral-length veil while filming 'House of Gucci' on the streets of Rome, Italy, on Thursday.

According to Page Six, the Ridley Scott-directed crime drama stars Adam Driver as doomed fashion mogul Maurizio Gucci and the 35-year-old singer as his ex-wife Patrizia Reggiani, who was convicted of plotting his murder in 1995.

Per Page Six, the bridal look was finished with a pair of Manolo Blahnik crystal-buckled 'Hangisi' pumps (USD 995) in cream satin. The sparkling shoes were the same as Carrie Bradshaw's wedding footwear from the first 'Sex and the City' movie.

It appears as though the 'House of Gucci' costume team took some liberties with the design of the dress itself; Reggiani's actual gown was much simpler in silhouette, with a high neck, long sleeves and zero sheer details whatsoever.

While the Gucci family featured in the story is no longer involved in the brand today, Gucci president and chief executive officer Marco Bizzarri recently told WWD that the company is allowing "total creative freedom" to the production, even "providing access to the house's historical archive for wardrobe and props."In March, the 'A Star Is Born' crooner offered fans a first glimpse at the film's costumes, when she posed alongside 37-year-old Driver in a black puff-sleeved turtleneck and trousers accessorised with plenty of gold jewellery and pearls, possibly from Gucci's archives.

As reported by Page Six, the singer's co-star wore a white snowsuit tied at the waist, a cream cable-knit sweater and glasses identical to those often worn by the late Maurizio Gucci.

While in character on set, the pair have also been spotted sporting classic trench coats, and Gaga has been snapped in a fur coat and chic red dress with matching heels.

Also starring Jeremy Irons, Al Pacino and an unrecognisable Jared Leto, the movie is based on Sara Gay Forden's book 'The House of Gucci: A Sensational Story of Murder, Madness, Glamour, and Greed,' and is set to be released in November. (ANI)

INDIANAPOLIS, Indiana - Breaking news out of Indianapolis.At least eight people have been shot dead by a lone gunman at ...

Covid surges in Brazil, France stops flights to the country

PARIS, France: As Brazil has been hit hard by a coronavirus variant, France will temporarily halt all flights to and ...

MOSCOW, Russia: Russia has called upon the United States to keep its naval ships from approaching the Crimea, saying U.S. ...

Covid precautions to be followed for Ramadan among Indonesian Muslims

JAKARTA, Indonesia: Social distancing is the rule for Muslims in Indonesia during this year's Ramadan holiday.At the start of prayers ...

KINGSTOWN, St. Vincent: Officials voiced concern today about residents of the eastern Caribbean island of St. Vincent who refused to ...

U. of Kentucky program for 36 students sends 500,000 acceptances

WASHINGTON D.C.: Uber, PayPal and Walgreens pharmacies have set up an $11-million Vaccine Access Fund to provide free rides to ...

Wall Street breaks out champagne as stocks soar into stratosphere

SYDNEY, NSW, Australia - Shares in Australia and Japan made cautious gains on Thursday, while in mainland China and Hong ...