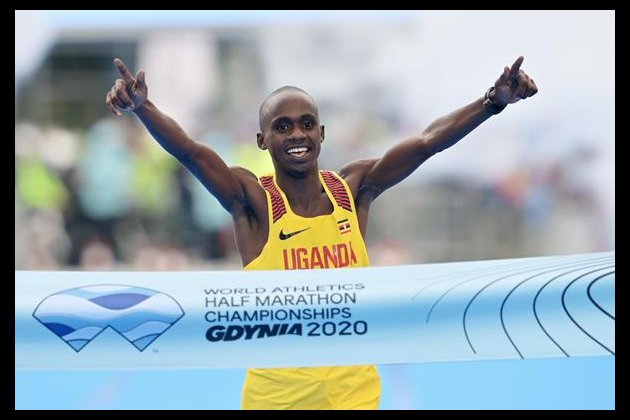 Jacob Kiplimo crosses the finish line of the World Athletics Half-Marathon Championship hold in Gdynia, Poland on October 17. (picture from the official website of World Athletics)

"I feel great, it was my first time at the World Half Marathon Championships and I won. It is hard to explain because I am full of emotion. Unbelievable. The weather was really good. I'm so grateful for everyone who has supported me," said Kiplimo just after the competition in an interview for World Athletics.

For Kiplimo it was a massive win as no Ugandan athlete had ever won an individual medal in 23 previous editions of the event. The event turned out to be special, with the first 10 athletes breaking 60 minutes, the first time that ever happened at the event.

Kenyan Peres Jepchirchir was the best in the women's competition. She broke the women's world record with the result of 1:05.16. Melat Yisak Kejeta from Germany came second and the Ethiopian Yalemzerf Yehualaw also stood on the podium.

Peres Jepchirchir celebrates in front of the finish line of the World Athletics Half-Marathon Championship hold in Gdynia, Poland on October 17. (picture from the official website of World Athletics)

"It's unbelievable. My goal was to win this race. I did not expect that I would beat the world record, but I realized that it could happen when we passed 20km. It was a little bit windy, but the course was good for me", claimed Jepchirchir.

This competition was scheduled to be played on March 29 but was moved to October due to the coronavirus pandemic. However, the mass run accompanying the competition of professionals, to which over 27,000 people applied, was held virtually.

The next edition of the World Athletics Half-Marathon Championship will be held in Yangzhou, China. The competition is scheduled for March 2022. ■

An outbreak of coronavirus in Ireland has been attributed to a flight from a country in the Middle East into ...

The U.S. space agency, NASA, reported Monday it has confirmed water can be found in sunlit areas of the moon, ...

America, damaged and divided, prepares to go to the polls

US President Donald Trump and his Democratic challenger Joe Biden are battling for the presidency of a deeply divided country, ...

RIVERSIDE, California - A U.S. man has been sentenced to twenty years in federal prison for conspiring to commit terrorist ...

SYDNEY, NSW, Australia - Stocks in Asia were relatively quiet on Tuesday compared to the volatility and substantive sell-offs on ...

UK needs to decide between bargaining power and negotiation strategy

LONDON, UK - Reaching an agreement in trade deals is, in the best of times, a long process. There are ...

SYDNEY, NSW, Australia - Stocks in Asia were limp on Monday, although the Hong Kong market showed some life.In Tokyo, ...