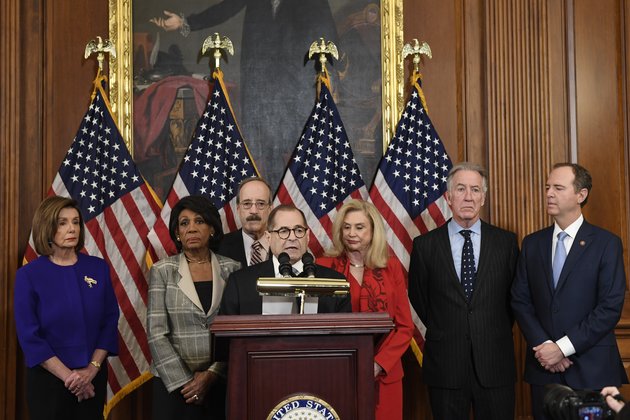 It was only the fourth time in the 243-year history of the United States that impeachment charges have been brought against an American leader, although Trump's removal from office remains unlikely.

House Judiciary Committee chairman Jerrold Nadler, head of the panel that will first consider the impeachment articles, contended that Trump "sees himself as above the law." Nadler alleged that Trump threatened U.S. national security by withholding key military aid to Ukraine and the integrity of the 2020 election, when Trump is running for a second term in the White House.

"He consistently puts himself above the country," Nadler said.

Explainer: Words Used in Impeachment Process Many of the words and phrases used in the impeachment process are particular to US law and governing clauses in the Constitution - here is a glossary:

Intelligence Committee chairman Adam Schiff, who led the weeks-long impeachment inquiry against Trump, called the allegations against the U.S. leader "overwhelming and uncontested."

But Trump has said he did nothing wrong and none of his Republican supporters in Congress has called for his impeachment and removal from office.

Before the allegations were announced, Trump, on Twitter, ridiculed the case against him.

"To Impeach a President who has proven through results, including producing perhaps the strongest economy in our country's history, to have one of the most successful presidencies ever, and most importantly, who has done NOTHING wrong, is sheer Political Madness!" Trump tweeted.

The crux of the case against Trump stems from his months-long effort and that of his key aides to push Ukraine to investigate one of Trump's chief 2020 Democratic rivals, former Vice President Joe Biden, at the same time the president was temporarily withholding $391 million in military assistance Kyiv wanted to help fight pro-Russian separatists in eastern Ukraine.

Nadler said his panel will consider the allegations in the next few days, possibly voting on the articles of impeachment by the end of the week.

That would set the stage for a simple majority vote in the full Democratic-controlled House of Representatives next week, when Trump is likely to become the third U.S. president to be impeached.

Trump would then stand trial in the Republican-majority Senate in January, although his conviction and removal from office remains unlikely because as yet no Republican has called for his ouster from the White House. While a small number of Republicans have voiced dismay at Trump's request to Ukrainian President Volodymyr Zelenskiy to investigate Biden, at least 20 Republican senators would have to turn against Trump to reach the 67-vote threshold for a conviction in the 100-member chamber.

Republican defenders of Trump say that ultimately Trump released the military aid to Ukraine without Zelenskiy announcing any investigation into Biden, his son Hunter Biden's work for a Ukrainian natural gas company or a debunked theory that Ukraine meddled in the 2016 election against Trump, while the U.S. intelligence community concluded it was Russia that interfered to help Trump.

In nearly 10 hours of testimony Monday, Democratic and Republican leaders of the Judiciary panel laid out sharply divergent views for and against Trump's impeachment, with Nadler leading the charge against Trump.

He said the president's actions were "clearly impeachable. This committee will proceed accordingly."

But the Judiciary panel's lead Republican, Congressman Doug Collins, a staunch supporter of the president, said that despite Trump's request for the Biden investigation, "Ukraine did nothing and got the aid anyway."

Collins accused Democrats in the House of Representatives of pursuing Trump's impeachment as soon as they won the chamber's majority a year ago, "to make sure the president can't win next year" when he is seeking re-election.

"Where's the impeachable offense?" Collins asked. "We don't have a crime."

Trump orders agencies to employ Americans ahead of foreigners

WASHINGTON, DC - President Donald Trump said Monday that he had fired the chair of the Tennessee Valley Authority, criticizing ...

Tensions between the United States and China are rising as the U.S. election nears, with tit-for-tat consulate closures, new U.S. ...

Prison in eastern Afghanistan under ferocious attack by ISIS fighters

KABUL, Afghanistan - An attack on a prison in eastern Afghanistan by ISIS fighters which began on Sunday has continued ...

The seven Marines and sailor missing after their amphibious assault vehicle sank off the California coast are presumed dead as ...

WASHINGTON, DC - U.S. President Donald Trump is banning the use of the TikTok app, widely used by Americans particularly ...

MEXICO CITY, Mexico - Mexico has recorded more coronavirus-related deaths than the UK, and as the figure rose above 47,000 ...

Former World Wrestling Entertainment star Dwayne "The Rock" Johnson has reportedly teamed up with an investment firm to purchase the ...

WASHINGTON, DC - The U.S. Securities and Exchange Commission said Friday that Bausch Health, a multinational pharmaceutical company based in ...

DUBLIN, Ireland - Good news for the tourism industry in Ireland. A total of twenty-six airlines have now resumed operations ...

Three people including a minor face charges over Twitter attack

SAN FRANCISCO, California - Three people, including a teenager and a juvenile, were charged on Friday for their alleged roles ...

Irish nightlife to get shot in arm from government support

DUBLIN, Ireland - Ireland is to establish a new taskforce which will see a range of departments, agencies and groups ...