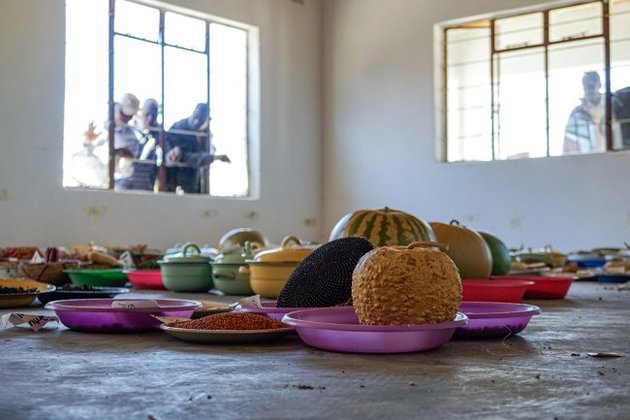 Farmers in Zimbabwe have started storing seeds for planting in seed banks, saying that the practice has many long-term benefits.

BULAWAYO, ZIMBABWE - The sweet and sour scent of seeds engulfs a storage room in the Dula Seed Bank.

The bank is one of five that communal farmers have built and jointly run in Matabeleland South and Matabeleland North, two lightly populated provinces in southwestern Zimbabwe.

Farmers deposit and store local favorites, like rapoko, a type of millet, and groundnut or peanut seeds here. These small grains, which originate in Zimbabwe, have brought farmers the most success in this fertile but drought-prone area.

The purpose of the seed bank is simple, says Thembinkosi Moyo, a farmer and the head of the Dula village in Matabeleland South.

"This community seed bank revives the traditional and cultural ways of seed preservation," he says. "We are deliberately depositing indigenous, small grains which are drought-resistant and easily adapt to the dry Matabeleland region."

Farmers withdraw seeds from the bank at no cost when the planting season starts. For every bottle of seeds they take, they must return two.

Moyo says the last two planting seasons have been tough on local farmers, thanks to low yields due to lack of rain. So seed banks play an increasingly vital role in seed preservation, self-sustenance and food sovereignty these days.

Farmers make deposits to the seed bank after every harvest so that they no longer have to purchase seeds every planting season. They can withdraw seeds from the bank at no cost when the planting season starts. And at the end of the season, the expectations are clear.

"If you withdraw a bottle of sorghum seeds from the bank, we expect you to bring back two bottles after your harvest," Moyo says.

There are other benefits of using local seeds, too.

Kerapile Mlotshwa, a nutritionist, says seeds from the seed bank have health benefits, too.

"Indigenous seeds are healthier as they are natural, which also improves the nutrition and diet of communities," Mlotshwa says.

Local farmers say they are happy to contribute to the seed bank tradition.

"We harvest and also ensure their storage," Samkeliso Ntungwana, a local farmer, says. "We, as the custodians of seeds in the traditional setting since time immemorial, are responsible for choosing seeds for the farming seasons."

Fortune Moyo, GPJ, translated some of the interviews from isiNdebele.

Fortune Moyo, GPJ, is not related to Thembinkosi Moyo.