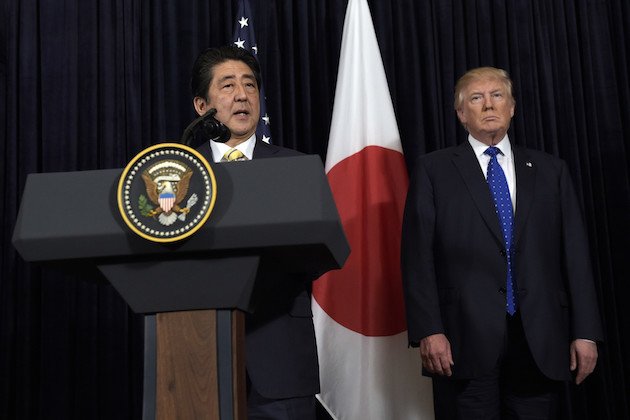 TOKYO, Japan - U.S. President Donald Trump says he would be fine with Japanese Prime Minister Shinzo Abe serving as a mediator between the United States and Iran.

Trump spoke as he and Abe opened a meeting Monday at the Japanese state guest house.

U.S. - Iran tensions escalated in recent weeks as Trump ended waivers that had allowed some of Iran's biggest oil buyers to continue making purchases despite new U.S. sanctions, and as he increased the U.S. military presence in the Gulf in response to what he said were Iranian threats.

Trump and Abe are scheduled to hold a news conference Monday afternoon after their talks that were to include military and trade matters.No quick breakthrough on trade is expected although both leaders have expressed a desire for a bilateral trade pact after Trump pulled the United States out of the comprehensive 12-nation Trans-Pacific Partnership, which Tokyo had spearheaded with Washington under Trump's predecessor, Barack Obama.

Trump said there would be an announcement on trade coming probably in August "that will be very good for both countries," and reiterated his desire to see a better trade balance between them.Earlier Monday, Trump became the first foreign leader to meet with Emperor Naruhito, who ascended to the throne May 1.Trump and first lady Melania Trump took part in an elaborate welcoming ceremony at the Imperial Palace.The U.S. delegation was greeted at the palace by several dozen elementary schoolchildren waving Japanese and American flags. A military band played the U.S. "Star Spangled Banner" and Kimigayo anthems.

The emperor is hosting an imperial banquet at the palace Monday night.

On Sunday, Trump and National Security Advisor John Bolton were publicly at odds about the seriousness of the threat currently posed by North Korea.In a Sunday morning tweet from Tokyo, Trump issued a retort to Bolton who the previous day here had told reporters that there was "no doubt" North Korea's recent test firing of short-range ballistic missiles violated a United Nations resolution.Bolton's remark was the first by a U.S. official describing the North Korean launches as a violation of U.N. resolutions.

"North Korea fired off some small weapons which disturbed some of my people and others, but not me," said Trump in his tweet.

Trump's tweet on North Korea caused confusion and consternation, not only within the administration but also among America's allies in the region, acknowledged senior White House officials traveling with the president

Some analysts say the missile launches are indeed a concern.

"It's pretty clear the missile launch was a violation of U.N. sanctions, whatever the range. The reality is that U.S. forces and civilians in South Korea and Japan are already in range of North Koreans missiles, so accepting shorter or mid-range missiles puts the United States at risk, not to mention our allies Japan and the Republic of Korea," Kevin Maher, a Washington security consultant and a former head of the State Department's Office of Japan Affairs, tells VOA. "These realities are inconvenient if the objective is to show a personal relationship with the dictator Kim Jung UN will stop North Korea's continuing nuclear and missile programs."The U.S. president also expressed confidence the North Korean leader, Kim Jong Un, "will keep his promise to me" in moving towards denuclearization.

Trump said Monday there is "good respect" between the United States and North Korea, and he thinks "lots of good things will come."

Trump and Kim have held two summits – in Singapore and Hanoi. Neither has led to any significant breakthroughs although the meetings were seen as reducing tensions between the two countries which have no diplomatic relations and their leaders had never met before.

The United States and North Korea were belligerents in a three-year war in the early 1950's which devastated the Korean peninsula. It ended with an armistice, but no peace treaty has ever been signed. Bolton, who 13 months ago replaced retired Army General H.R. McMaster as the president's national security adviser, is known as a hardliner who distrusts Pyongyang's intentions.North Korea has a long track record of violating international agreements and has repeatedly defied U.N. sanctions against its nuclear weapons and ballistic missile programs.Before Trump departs Japan on Tuesday, he is to visit the naval base at Yokosuka to tour a Japanese helicopter carrier and address American service personnel in conjunction with the U.S. Memorial Day holiday (observed on Monday).

Officials say that seven civilians have been killed and six others wounded in a roadside bomb attack in northern Afghanistan.The ...

Tensions between U.S. black communities and police go back centuries

Outrage over racial profiling and the killing of African Americans by police officer ...

WASHINGTON, DC - Under siege in the White House, President Donald Trump is aggravating America's latest racial anguish in a ...

NEW YORK, New York - Stocks in the United States, and across the world were in demand again on Tuesday, ...

Chinese solid waste imports down by nearly 50% this year

BEIJING, June 2 (Xinhua) -- China is now moving closer and vows to achieve its goal of halting all imports ...

CO CORK, Ireland - A U.S. manufacturer of essential oils, health and wellness products is developing a manufacturing plant near ...

Dubai getting back to business after lengthy break

DUBAI, UAE - Malls throughout Dubai are slowly building their business after being dormant for some weeks due to the ...

News Corp's closing of its community and regional papers, with few remaining and others online-only, cancels centuries of beliefs about ...