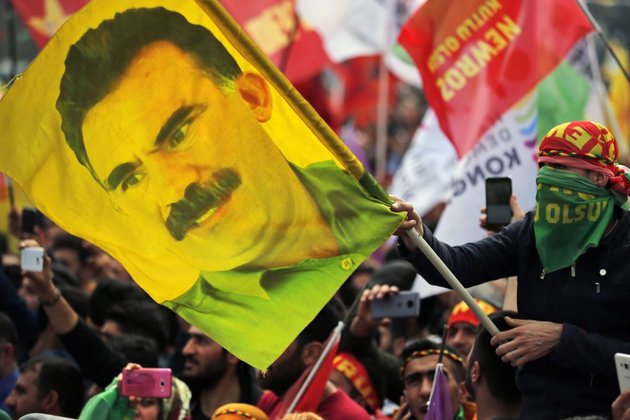 Thousands of prisoners in Turkish jails have ended a 200-day-long hunger strike after jailed Kurdish rebel leader Abdullah Ocalan was allowed to see his lawyer for the first time in eight years.

'Comrades who have committed themselves to hunger strikes and death fasts, I expect you to end your protest,' Ocalan said in an appeal to his supporters Sunday. He has been allowed to see his attorney twice in the past week

A number of Kurdish lawmakers had joined the 3,000 prisoners and others in refusing solid food unless Ocalan was allowed to consult with his lawyer on Imrali Island prison.

'But our struggle against isolation and our struggle for social peace will continue in all areas. This struggle must lead to an honorable peace,' she said moments before being placed in an ambulance.

Ocalan is leader of the outlawed Kurdistan Workers' Party (PKK), which has been fighting a guerilla war for an independent Kurdish state in Turkey.

Turkey, the United States and the European Union have designated the PKK a terrorist group.

Turkish forces arrested Ocalan in Kenya in 1999. He is serving a life prison term.

Some Turkish analysts say allowing Ocalan to see his lawyers could be a sign the government is hoping to win over Kurdish voters ahead of next month's repeat mayoral election in Istanbul.