Japan under fire from North Korea during Trump tour 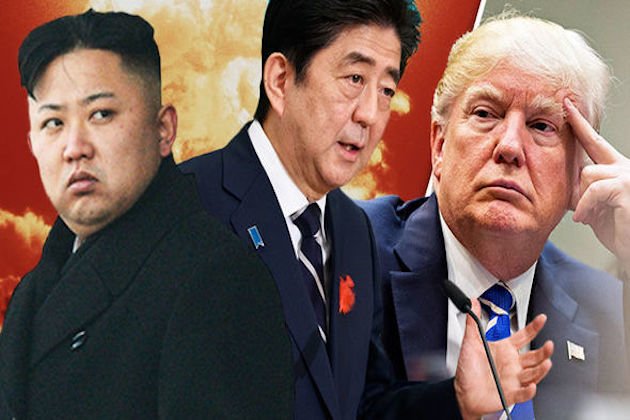 In the first statement carried by the North Korean state news agency KCNA on Sunday, aim was taken at the Japanese Defense Ministry for inaugurating a unit specializing in outer space operation.

"Japan, desperately spurring its moves for emerging as a military giant, has just stretched out its tentacles of aggression even to outer space," the statement said.

"Japan seeks to turn itself into a military giant. While seeking to secure military edge on land and at sea and in the air, Japan works hard to rank itself among big powers also in space militarization."

The statement goes on to label Japan a war criminal, accusing it of having aspirations of invading other countries, and describing this as "very dangerous."

"As Japan is just a war criminal state and war forces dreaming of overseas invasion, such reckless moves are very dangerous," the statement said.

"Every move of Japan has been oriented to realizing the regime's wild ambition for turning it into military giant and launching overseas aggression."

"By cutting itself loose from the shackle of defense, Japan let its "Self-Defense Forces" stage military drills overseas openly against other countries," said the KCNA report.

"Clear is what Japan seeks in space militarization."

"The space militarization is a grave threat to peace and stability," the statement added.

North Korea said outer space is the common wealth of mankind, and should be used for peace, stability and human development.

In the second statement released on Sunday, the North Korean government says it is concerned about the Chongryon, a group in Japan which consists of North Korea residents which has a close relationship with the regime and acts as a defacto embassy for North Korea.

Chongryon, says North Korea is being touted as being in a position to carry out "violent acts of sabotage if the situation presents itself" because of its "close contact with North Korea." The statement said Japan regarded Chongron as a 'rebel organization.

'KCNA reported: "The Japanese reactionaries in the written answer labeled Chongryon as a target of investigation under the Act for the Prevention of Sabotage while bringing 14 kinds of false charges against Chongryon like "abduction" and "illegal export."

The North Korean government statement said Japan remained unchanged in its hostile policy towards North Korea and Chongryon" despite the changed situation and peaceful climate on the Korean peninsula which draw the attention of the international community."

The statement went on to say, "Japan is a country which has the cross on its breast and the devil in its heart and commits wicked deeds against its words, and a despicable and impudent violent state and a real target to be checked for the prevention of sabotage."

Meantime President Trump arrived in Tokyo on Saturday for a four-day state visit, which will include discussions on a bilateral trade agreement. Ahead of North Korea's statements, the president in fact lauded military ties with Japan and spoke of U.S. sales of arms to the Japanese military.

"As you know, the United States and Japan are hard at work negotiating a bilateral trade agreement, which will benefit both of our countries. I would say that Japan has had a substantial edge for many, many years, but that's okay. Maybe that's why you like us so much. But we'll get it a little bit more fair, I think.  I think we'll do that," Trump saiod shortly arfter touching down in Tokyo.

"We also have a tremendous relationship on the military.  And Japan is ordering a great deal of military equipment. We make the best equipment in the world: the best jets, the best missiles, the best rockets. The best everything. So Japan is doing very large orders, and we appreciate that, and we think it's probably appropriate right now with everything that's going on. The world is changing."