Belgium and EU warn of escalating violence in Burundi 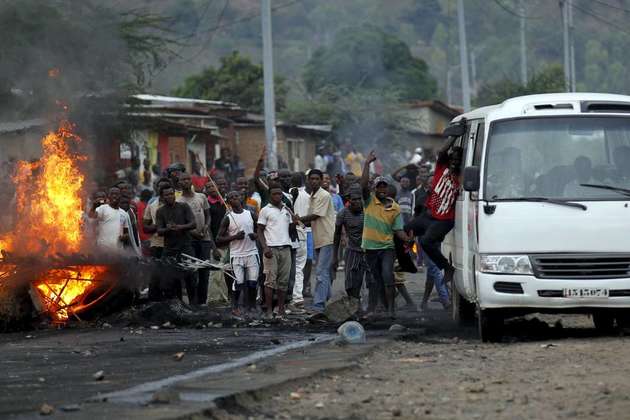 BUJUMBURA, Burundi - Belgium has advised its citizens to leave Burundi, while the EU has announced it is cutting staff levels at its embassy in the country because of the "rising risk of violence".

Belgium has told citizens that those among about 500 Belgians in the country "whose presence is not essential" should leave the landlocked African nation.

The European Union says it will evacuate its employees' temporarily and that "families and part of the non-essential staff" will be among those pulled out.

The cycle of violence in the country began with protests against President Pierre Nkurunziza's bid for a third term.

He is barred by the constitution from sitting a third term, but claims that his first does not count as he was elected by parliament and not the populous.

At least 240 people have died in protests and riots since the unrest began in April.

There are growing fears of a Rwandan-style genocide in Burundi, which has a history of tensions between Hutu and Tutsi ethnic groups.

The Belgian foreign ministry said in a statement: "We advise Belgians who are currently in Burundi and whose presence is not essential to leave the country as soon as normal measures allow."

The EU ambassador to Burundi, Patrick Spirlet, said that the "rising risk of violence" had prompted the EU mission in the capital Bujumbura to reduce some staff, according to Reuters.

He stressed that "the delegation will continue functioning normally" however.

These measures come a day after the UN Security Council unanimously adopted a resolution strongly condemning the escalating violence.

The French-drafted resolution paves the way for a possible deployment of UN peacekeepers and requests that Secretary General Ban Ki-moon reports within 15 days on options for increasing the UN presence in the impoverished African country.

UN officials are considering alternatives, including rushing in peacekeepers currently deployed in the Democratic Republic of Congo.

That will require another vote in the Security Council.

LONG BEACH, California: Long Beach, California-based Rocket Lab has launched its first mission from the United States, as part of ...

WSJ says Israel and Mossad behind Sunday's attacks on Iran

Israel was behind Sunday morning's drone strike on an Iranian munitions facility; the Wall Street Journal has reported, citing American ...

UK tanks for Ukraine must arrive by March, says minister

LONDON, England: Of the 14 main battle tanks and additional artillery support it will send to Ukraine, Britain hopes its ...

Exec for Juan Valdez coffee sentenced to jail in $900,000 theft

NEW YORK CITY, New York: After being convicted of stealing more than $900,000 from the company, Rosita Joseph, former executive ...

WASHINGTON D.C.: The US State Department has said that in the latest fiscal year, US military equipment exported to foreign ...

SEOUL, South Korea: South Korean officials have said that the government will double energy vouchers and provide discounts on gas ...

AUSTIN, Texas: Tesla gas announced an investment of more than $3.6 billion to expand its Nevada Gigafactory complex with the ...